Tom Keesecker in Concert Nov. 10 at 6 pm in the Faith Center 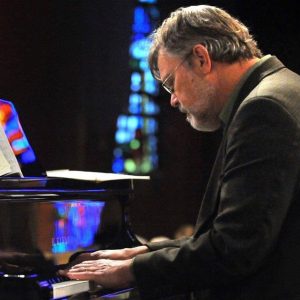 Pianist and composer Tom Keesecker will share an evening of music, poetry, stories and laughter with a concert, “The Quiet Harvest,” on Sunday, Nov. 10, at 6 pm in the Faith Center.

Tom will also share some of his music with us at both our 9:27 and 11 am worship on Sunday morning.

Tom, who lives in Maryland, has released a series of contemplative piano pieces centered around the seasons of the church year.

According to the ECS Publishing Group blog, “Keesecker saw a need for uncomplicated, introspective hymn-based pieces that would serve to help us reflect on the themes of the season.”

To that end, he has published four books: “The Quiet Center” (Advent and Christmas), “The Quiet Night” (Christmas and Epiphany), “The Quiet Journey” (Lent), and “The Quiet Harvest.” The fifth and final book in the series, “The Quiet Heart,” will be published in spring 2020.

Tom and Rob Durocher, minister of music and deacon, have been friends for years. Tom’s mother-in-law, Virginia Baker, was a member of St. John’s. Tom is doing a series of mini-concerts in October, November, and December, and contacted Rob about performing at St. John’s.

“I think he’s an exceptionally gifted pianist and composer,” Rob says. “He’s written numerous anthems. He is just so easygoing. His style is so disarming, engaging, interesting and funny.”

The concert, Rob says, “prepares us for the gathering in of God’s harvest.”

The pieces are based on familiar hymn tunes — sometimes two in one piece — and Tom will share stories about where the hymns came from. For example, the woman who wrote “Over the River and Through the Woods” was an abolitionist and worked for women’s rights.

The concert will include the poetry of Wendell Berry, Robert Frost, and Mary Oliver. And it’ll include poems on why pumpkin pie is the best thing on earth, Tom says.

Tom has been playing piano since age 6.

“My mom played and I wanted to play and so I took lessons,” he says.

He remembers riding his bike to his piano teacher’s house.

He was writing and improvising music by age 12, but in high school, his music theory teacher encouraged him to start writing it all down. He studied composition in college, and has been a church musician his entire career.

Tom has served as a musician in both Lutheran and Roman Catholic parishes in Virginia, Montana, and Maryland. His award-winning choral music is published by several publishers. His studies at the Berklee College of Music in Boston and the Catholic University School of Music in Washington, D.C. prepared him for a career in which he has mixed classical technique and jazz improvisation.

The concerts, he says, “are almost like church, but more fun, because I get to crack jokes.”