If you want to take a deep dive into a variety of religious topics, consider the study group hosted by Roger and Linda Hull.

The Hulls started the group at their home in 2006 and have been going strong ever since.

Using the video series “The Great Courses” as their guide, they’ve studied topics like The Old Testament Canon, Buddhism, Islam, Judaism, Christianity, From Jesus to Constantine, How Jesus Became God, Saving Jesus, Science and Religion, the Apocalypse, The Life of Muhammed, and Religions of the Ancient Mediterranean.

The group typically meets the first two Sundays of the month but can be flexible depending on the church calendar. About nine to 12 people usually attend, individuals as well as couples, Roger says.

Elaine Gerst has been attending the group for about seven years.

“It’s something that stretches you,” she says. “I have very concrete beliefs, and it challenges you to think outside the box. I like the honest sharing that we do. No one has all the answers. We share our perspectives, and we love and respect each other, even if we disagree with one another. We listen to each other. The conversation that goes around the table is well worth the time spent with the group.”

The group gathers, watches the video, then breaks for a snack, Roger says. “It’s important for people to get to know each other and visit.” Then the group comes back together for discussion and questions.

There are some ground rules, Roger says. “You’re free to believe and say what you want. This is a way to dig deeper into theology and understanding of faith or lack thereof.”

Roger says of the group study, “It helps me. It gives me an opportunity to learn right along with the group. I want to challenge people. I want people to understand their faith and the roots of their faith. Our faith didn’t drop out of the sky. It developed over centuries into what it is today.” 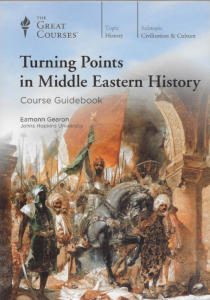 The next course: Turning Points in the Middle East

On Oct. 13, the group will begin studying “Turning Points in Middle Eastern History,” by Eamonn Gearon of John Hopkins University.

Discover the majestic cultures and astonishing history of the Middle East, looking behind the headlines to understand this significant region. Given what is happening in the Middle East today, this important course will contribute to a broader understanding of its history and how it became what it is today.

If you’d like to learn more about the Hulls’ study group, contacr Roger Hull.